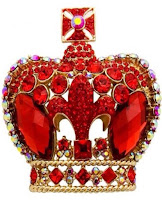 Chapter 3:
Crystal
“That went well,” I said briskly, my guards following me up the stone stairs. The hallway stretched for what looked and seemed like a quarter mile, and the plush maroon carpet smothered my feet in comfort and ease. I couldn’t quite get over Katheryn's words. “‘Okay, then. Well, I guess I thought you aren’t as evil as I thought you were.’” Why would she think I was her friend? She must be crazy. Yes, that's it, she’s just gone mad from acting as my friend. How long has it been since we became “friends?” A year or so, I think. That's it, I told myself, there’s no way that there's one gram of good in me.
At least that's what Mother tells me, and each and every night when she comes home and tucks me in, she strokes my hair and whispers in my ear, “Soon you will follow in my footsteps, understand?” When I was 6 or 7 she said it playfully. When I was 10 and 11 she said it determinedly, but alas now I am 12, and she says it harshly, for she's always busy now with the Scarlet Kingdom in the Scarlet Dimension. But following in her footsteps means learning to deceive, torture, and give out punishments. Oh how I imagine the day I will be crowned the Scarlet Queen!
I shook myself out of my thoughts and said to my guards, “Ally, Amy, please stand guard at Miss Katheryn's door. She’s one girl we need to keep an eye on.” They bowed and headed back down the stairs.
Meanwhile, I climbed the stairs in the opposite direction. I needed to think. When I entered my room I dashed to my desk and pulled out the same stationary and pen I used to interrogate Katheryn. I needed to make a list. I had sixteen captives, eight boys, eight girls. I had everyone I needed to put my plan into action.

Katheryn
I paced back and forth, muttering angrily. The nerve of that girl! Pretending to be my friend, then taking me captive. My parents probably thought I was having a sleepover with Crystal. Urgh! I didn’t even want to say or write her name.
I wanted out of here. I wrenched the bars off their hinges, but they were too heavy for me to continue lifting them. I tossed them onto the carpet, and they made a loud thump as they disappeared into the folds. I waited, my heart beating loudly. Okay. Nothing. That’s a good sign.
I gathered everything I would need to survive and stuffed it all in a backpack. Then I climbed out the newly made window. I gulped deep breaths of fresh, afternoon air. Finally! Freedom!
Understatement of the year. I heard footsteps and was willing to bet it was Crystal and her guards. I curled myself into a ball on the grass and prayed they didn’t hear my scared breaths.
There was a crash, and I knew that Crystal must have used a key or something to get into my room and that she flung the door open against the wall.
“Nothing. She’s gone.” Crystal’s voice. I was relieved and surprised at the same time to hear panic in her voice.
“The bars are gone!” gasped another voice. A guard. “She must have wrenched them off! How is that possible?!”
“She’s not known as Katheryn the Iron-Fisted for nothing,” Crystal said, her voice tight. “This is why I was so determined to get sixteen. They all have a special ability.” I hardly dared to breathe. “Come on. We have to find her. She can’t have gone far.” I couldn’t help it. I had to let her know I was safe, even if she was evil to the bone.
I jumped up and yelled, “Crystal!” She turned, and a satisfied smirk spread across her face. Too late did I realize my mistake. Ugh! I could've gotten away! I'm so dumb, I scolded myself silently.
“Well, well, look who came crawling back. You know, that was your last chance to see the light of day from outside,” Crystal drawled.
“Well, I'm outside, and you’re inside,” I yelled, bolting away from the mansion.
“My lady, should we get her?” a guard asked.
“No, Ally,” Crystal replied. “She’ll learn the hard way.”
Zsp! Pain flew up my back.
“Ouch!” I yelped.
“Now,” said Crystal calmly. The last thing I remember before blacking out was Crystal and her guards leaning over me. Then I lost consciousness.