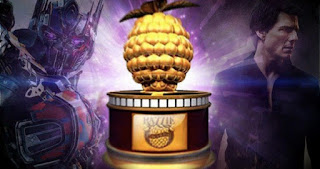 The Golden Raspberry Awards, or Razzies, recognize the worst that Hollywood has to offer. This year's nominations have been announced! You’ll never believe who has been nominated and which movies have been chosen. It might even upset you like it did me.

(Author's Note: In my opinion, I think that JD should NOT have been included in the Razzies.)


As you can see, a lot of the people that were included in the Razzies will surprise you. I mean, JOHNNY DEPP!???????!!!! Anyway, I hope you enjoyed this post!
awards entertainment Johnny Depp lists March movies News