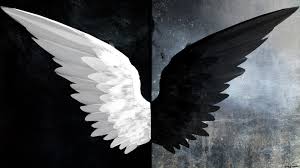 All I can see is darkness.
My eyes are open, I think. Where am I? Am I alive? Am I dead?
I should be dead. Did someone save me?
I gasp suddenly, sitting up, one hand supporting me, the other on my heart. What the hell happened?
The flow of memories comes rushing back to me in bits and pieces. A dagger. Aedrien’s grief-stricken scream. Darkness. A teenage girl’s shocked face.
I glance down at myself and see that I’m wearing just a simple, white, maxi robe that’s tied around my waist.
“Hello,” a female, disembodied voice says, startling me. Her voice isn’t robotic; it’s almost…breathy. Delicate.
“H—hello?” I ask, unsure of the correct answer.
“You feel that you should be sent to hell, correct?” she asks.
I hesitate before replying, “I’m not sure where I should go.”
She sighs. “You did many bad things in your life.”
“I know.”
“Yet you took the dagger that was meant for your brother.”
I swallow, my throat closing up, remembering. “Am I dead, then?”
A pause. Then she says, “You are in the Place of No Matter, where I judge souls and determine where they should go.”
“So where do I go?”
She pauses again. “That’s the thing. I don’t know where you should go. You were a thief your whole life, but you sacrificed yourself for your brother. That’s a noble thing to do; it’s not a choice others would make.”
Her words hit me suddenly. “Who am I?” I whisper hoarsely.
“You are a brave girl who risked everything to save your brother’s life,” she says gently. “And at great depletion of my power, I can bring you back from the dead. I will give you a dagger to defend yourself, but please do not try to harm anyone with it.”
I look up, hopeful. “You can bring me back to life?”
“Yes. However, there is one consequence.”
“Let me hear it.”
“You will not remember anything of your previous life. That means that you will not remember your brother, nor your parents, nor your friends, nor anything you stole as a thief. You will not remember what school you go to, nor your last name. You will not remember a single thing, including your time here. You will only remember your name, which I will give you.”
“Where will I live, and who will I live with? How old will I be? What will my name be?” The questions tumble out of my mouth.
“You will live with your old family. As of now, your body is in the hospital, being prepared for burial. You will be the same age you are now, sixteen years old. As for your name…” she pauses here.
“Your name will be Angel.”