The Cursed Game: a Short Story 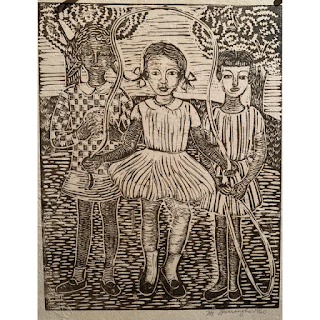 It was an ordinary day for Sophia. She was having a playdate with her two friends, Lisa and Lila. They were twins, and Sophia always mixed them up. They were all 8 years old. “We should play Simon Says!” Lisa suggested. They all agreed, and Lila decided to start. They played for about 45 minutes. “Time for lunch, girls!” the twins’ mom called. They all went inside and started munching on ham sandwiches and chips. “What should we do after this?” Sophia asked while slurping her fruit punch. “Maybe color with chalk on the sidewalk?” Lila asked. “Sure!” Lisa and Sophia said at the same time. They all cleaned up their plates and went outside with the chalk. “Simon says... Simon says... Simon says...” a mysterious voice boomed. “Did you guys hear that?” Sophia asked with panic in her voice. The two twins wearily nodded their heads, their short blonde hair swishing in the sudden breeze. “Simon says start fighting with each other,” the mysterious voice boomed again. The girls started pulling each other’s hair and tried to poke each other’s eyes. Lisa poked Sophia’s left brown and Sophia screamed in pain, a tear falling down her cheek. “Simon says stop,” the voice boomed. The girls suddenly snapped out of their trance and Lisa looked at Sophia in horror at what she had done. “I’m so sorry, Sophia!” Lisa cried. “Please forgive me!” Sophia accepted her apology, and then they all frantically looked around for the source of the voice. “Simon says, Lisa, jump in the road,” the voice boomed with an evil laugh. Lisa, in a trance, jumped into the middle of the road while Sophia and Lisa held her back with no success. Both girls screamed trying to get Lisa’s attention. Then, an idea popped in Lila’s head. “Simon says this game is over!” she shouted. “Nooo….” the voice faded away. Sophia went and grabbed Lisa, pulling both of them onto the grass. They all reassured Lisa was okay. Then they knew the popular children’s game was cursed. They all decided to go back inside. Lila was the only one outside.

“Mwhahaha,” Lila said, in the voice of “Simon” from earlier. Both girls inside gulped, hearing the familiar voice. They were in trouble.