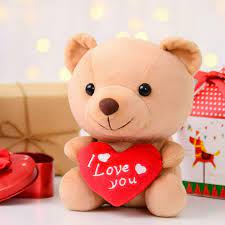 “Oh my god, I love it!” Hailey squealed. Her boyfriend, Ryan, had surprised her at school with a huge stuffed bear for Valentine’s Day! Hailey went to her apartment and put the bear in her room. She put it on her bean bag chair, then left to meet her friend.

They decided to go shopping and got a bunch of things from the mall. When she got home, she quickly got dressed and started doing her makeup. Once she was all ready, she went back into her room and saw the bear sitting on her bed.

Hailey was confused, but then she realized, maybe Ryan snuck in and moved it. She heard a knock on the door and rushed out to greet her boyfriend. They got in his car and drove to the restaurant for dinner.

“Thanks for moving my bear,” Hailey said. They had just sat down and were looking at the menu.

“What do you mean? I never did anything,” he replied jokingly.

“Sureee,” Hailey replied, laughing. The waiter came, so they ordered their food and enjoyed their night.

Once they got back in the car, Hailey asked, “Hey, you wanna stay at my place for the night? So you don’t have to drive that far?”

“Sure,” he agreed, while arriving at her apartment complex. Once they got inside, Ryan crashed on the couch while Hailey used the bathroom.

When Hailey got back to her room, she noticed the bear wasn’t there. She checked near the tv, and the bear was there. It was staring at Ryan. She chuckled to herself and brought the bear back into her room, but it felt weirdly heavy. She assumed she was just tired. It took a while for her to fall asleep, but eventually she did. She was awoken suddenly by a noise.

Then she realized something that made her heart jump. Ryan didn’t have a key to her apartment. The bear moved by itself. Quickly, she checked her phone and saw it was 7:22 AM. She ran to the couch to realize her boyfriend was gone. She frantically searched everywhere, being confused because his keys were still on the counter. She ran back to her room, and her heart stopped.

There was a trail of dark red leading out of her window, and the stuffed bear was gone.