In a different universe, some humans are born with special abilities. In a time of destruction and ruin, the legendary Renegades were formed to overthrow Ace Anarchy. Now the city is in a time of peace and prosperity...or so they thought. 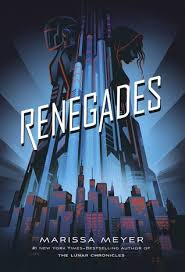 Nova Artino’s parents and baby sister were murdered although the Renegades promised to protect them. As a result, she’d been taken in by her uncle, Ace Anarchy and given a false last name. Villainry is all she’s ever known...until she meets Adrian Everhard, the son of one of the heroic renegades themselves. By day she’s Nova McLain, a patroller at the renegade headquarters, but by night she is Nightmare—the elusive villain that the Renegades can’t seem to stop.


Adrian Everhard’s mother has been killed by a mysterious villain. Since then, he has sworn vengeance against the those who call themselves the Anarchists. But Adrian also has a double life, at night he is the heroes Sentinel, and his worst enemy is Nightmare. By day they slowly gain each other's trust, but at night they chase the other down through the streets of Gatlon.


Could such a confusing pair of double lives ever work out? Especially when their motives are polar opposites. Marissa Meyer captures and portrays the idea of justice vs vengeance, making the reader question the borders between good and bad.


Renegades was written by Marissa Meyer in 2017.


This book reminds me heavily of Catwoman by Sarah J. Maas. I especially love the book. The author starts off with a bang, only letting you glimpse what is happening through flashes of memory before the whole story starts to unfold, granting you the big picture. It also switches perspectives which I enjoy, since you get to know the characters without it being through a dialogue with the main character.


My overall takeaway from the book was, It’s hard to live a double life, sometimes you have to lie to those close to you to not hurt them, but they get hurt either way.  I recommend this book to teens who are switching from books where the ending is joyful and conclusive to books where there are more twists and dark plots.

Make sure to read the next book,