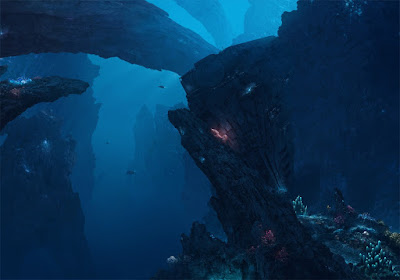 I shut my eyes tightly, not wanting to see but shortly realizing that would do me no good. It was just one bad thing after another. I peeked out for a second, and there it was, plain as day: the humanoid shape. It was the darkest black I’d ever seen. Even in the murky darkness around me. I just wanted to look away, but I was fixated on it. It seemed to do the same with me. That thing was almost... Leaking. Growing. My eyes began to burn, and I had to blink.
It was closer now, not moving. It was paralyzing. I backed up, only kicking, never taking my eyes off of it. I had to swim to the surface. I had to see my family again. Then, I just went for it. I shut my eyes and swam... and swam. I just tried to run away from it all. The air in my lungs already felt thin. A little red light blinked in my peripheral vision. Something had changed. I thought that the humanoid figure was the one that caused all this misery. He seemed to be beckoning, wanting me to come. It seemed I was making all the wrong decisions today, or days… how long has it been? I kicked and pulled, struggling to see light once more. I gazed at the creatures that once filled me with wonder and curiosity. The blackness was all around me. It was claustrophobic. The roomy suits felt small. I was trapped. This feeling came over me. It pulled the air from my lungs and left me gasping for breath. Still, that tiny light blinks bright as the sun. I peered around the on cameras, fearing this would be the last time I would do so. My heart pounded, and my vision blurred. Spots appeared on my screen--no it was my vision. I shut my eyes tightly, coughing and wheezing. I was cold, so, so cold. I opened my eyes one last time to see the dark figure floating before me. His hand was outstretched. My eyes finally focused on the red light,
“AIR REMAINING: 30 SECONDS”
I outstretched my hand to reach and touch the inky blackness of a hand.

And everything went dark.